You are ordering food at a drive-through. The person behind the window shoves the bag of food through your window and barks, “HAVE A NICE DAY” in an irritated tone. Even though you drive away with your favorite food, your mood has changed.

Now a study suggests not only did the server’s tone of voice affect your mood, but it most likely affected his own for the worse. It could be possible that your tone of voice can make you feel how you sound. An international team of researchers found that when people listened to their own voice in a headset altered in real-time to sound happy, sad, or neutral, their emotional state changed accordingly to how they sounded.

Dr. Petter Johansson, a researcher from Lund University and one of the study’s authors, when interviewed by The Huffington Post commented, “The voice is one of our main channels of emotional expression, and the results of this study indicate that when we speak we do not just influence others but also ourselves,” he continued, “In a sense, we listen to our own voice to find out how we feel.”

It is very common for people in many different cultures to use an angry, aggressive, irritable or condescending tone of voice when asking their dog to do something for them. I believe there are two main reasons people do this. One reason is that they are taught by a trainer to speak to their dog in this manner or copied a family member or friend’s behavior. Another reason is that the person unknowingly slipped into using this tone of voice over time, due to the emotions they felt when training their dog in the past. For example, perhaps in the first few training sessions the person said, “Sit” in a neutral tone, but when the dog did not sit, the person felt frustrated and used an irritated tone and then the dog finally sat. Each time the person asked their dog to sit and the dog did not, the person’s tone of voice got more irritable, angry and intimidating.  Over time the person was conditioned to use the negative tone of voice right off the bat when asking their dog to do something.

I believe that using a negative tone of voice while training and interacting with your dog daily can greatly decrease your general sense of wellbeing as well as can influence the way you perceive your dog. I also believe, that by consciously changing the tone of voice you use with your dog to sound positive, you will change how you feel, as well as how you feel about your dog.

Could how you talk to you dog affect your perception of your dog?

I believe, when using an irritated, demanding or aggressive tone, you could possibly create an image of a dog in your mind who is stupid, lazy, defiant or downright despicable. Conversely, when using a respectful upbeat tone of voice, you are creating an image of a dog who is a trusted friend, a dog who doesn’t do as you ask sometimes because he doesn’t understand what you want or you have not made it worth his while. The way you perceive your dog, I believe shapes your relationship and bond.

Does your tone of voice affect your dog’s emotional state?

We cannot know how a dog experiences the world of emotions. But a happy upbeat tone of voice, a good training plan and the correct reinforcement to motivate a dog can produce perky ears, eyes confidently focused on you and an expression related to the anticipation of something good happening. While a threatening tone of voice can produce a slew of appeasement gestures and stress signals, such as ears pulled back, paw lifts, lip licks, yawning, frequent blinking, looking away, tension in the face, a suddenly gaping mouth, a head lowered similar to hunching, a chin raised up in a submissive posture, fidgeting, frustration related behaviors, vocalizations and/or acting goofy. All dogs are different and will vary how they look when they feel uncomfortable as well as how they feel when they are confident and motivated.  Some dogs can actually habituate to the sound of an angry voice, while others do not.

What I tell clients and other trainers to do is observe their dog’s natural behavior and to try to achieve in their training the same expression that their dog makes when he’s enjoying himself or relaxing. For example, when asking your dog for an active behavior he should make a similar facial expression to the one that he makes just before you throw a ball. If you are working on a calm behavior, his facial expression should look like what he looks like when he is at rest, for example, chilling in his dog bed in the evening.

Can you see the difference? 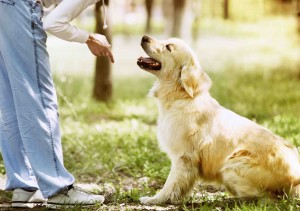 To the right the Golden Retriever is putting his ears back, blinking his eyes, and lifting his chin in a submissive posture.

In the two pictures below, can you spot the difference in the dog’s facial expression? On the left the Border Collie’s ears are in a somewhat relaxed position, while on the right the dog’s ears have gone back, his facial muscles are tense so you can see more white in his eye, and he is hunching over and licking his lips.

It is not just our tone of voice that affects a dog’s behavior, but also our body language.

Most dogs find it intimidating to be leaned over, as well has having visual cues done extremely close to their face especially in an aggressive manner. Interestingly, these are the same behaviors that make most humans feel uncomfortable as well. This is just my opinion, but I also believe using intimidating body posture also affects our own state of mind negatively as well as affects the way we see and experience dogs. On the left the Border Collie has a natural ear position, while on the right the dog has pulled his ears back and lifting his chin. 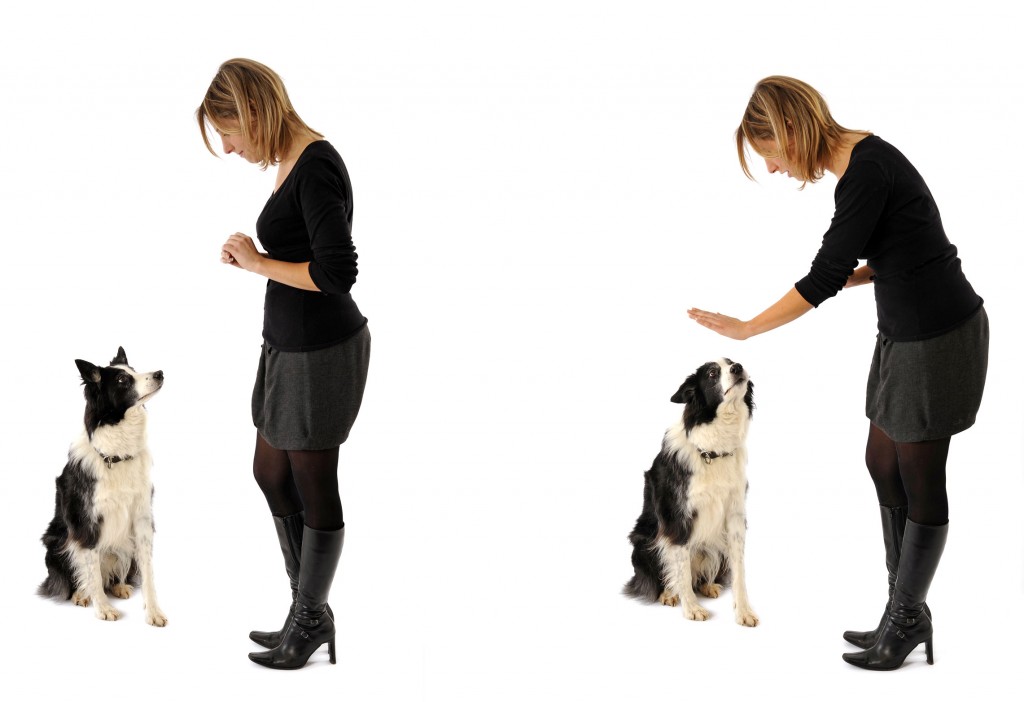 Give it a try

A 2-5 minute training session with your dog using a positive tone can build your relationship and be a self-healing event; practicing respect, patience and compassion as your dog enjoys a fun training game. Where barking orders at your dog and telling him off when he is wrong every morning, in my opinion, could possibly put a damper on your mood for the rest of the day.  When using intimidation to get your dog to do as you ask and your dog doesn’t listen to you, it can feel like an affront. However, when training your dog with Positive Reinforcement, if your dog doesn’t listen to you, it simply means you need to reassess your training plan.

To begin, train in a new location, a room you usually never use to train your dog. Ask your dog to do his favorite behavior, using an upbeat tone of voice while trying not to lean over your dog.  Even if your dog does the behavior slow or reluctantly, say “Yes” or click and then give him a treat that is higher value than usual, for example a pea sized piece of grilled steak or chicken. Repeat 10 times.  Take note of your dog’s facial expression and body posture. In a matter of sessions you can condition a new emotional response to the upbeat cues, where your dog will be looking at you with a perky expectant expression as he performs the behaviors with enthusiasm. If your dog doesn’t respond to your cue, instead of increasing the volume of your voice or changing your tone, you can simply revert back to luring the dog into the position you asked for with a treat in your hand.

It’s a good idea to not train your dog when you are already feeling stressed, irritable, or angry. If you find yourself getting annoyed during training, the best thing to do is just give your dog a freebie treat and train later when you are in a better mood.  Don’t panic if you catch yourself using an irritated tone, it takes time to change our own behavior.  Film your training sessions and playback the footage. Listen to your tone of voice and watch your dog’s body language.  It can be surprising what one misses in real time.

Reasons to consider using a positive tone of voice:

In conclusion, it is my humble opinion that changing the tone of voice you use, not only with your pets, but also other human beings, can greatly increase your feeling of wellbeing, happiness and ability to practice compassion. The added benefit is that your positive tone of voice will also most likely positively affect the moods of those around you, including your dog!

Carolyn Gregoire, The Huffington Post, ‘Changing The Tone Of Your Voice May Boost Your Mood, And Here’s How’, https://www.huffingtonpost.com/entry/voice-emotion-study_us_56967a2ce4b0ce496422bf3e